Angelfish is originally carnivorous. That is especially for the wild ones. The angelfishes which live in the captivity then commonly become omnivore.

Fact 2: Involved in the Family of Cichlid

Angelfish is from South America. They are involved in the family of Cichlid. This family is including various kinds of popular fishes. They are including discus, parrot fishes, Oscar, and so on. Angelfish has the high risk of various diseases. They are including hexamita, columnaris, Ich, and so on. That is why it is a bit tricky to take care of them properly.

Fact 4: Need the Long Time Adaptation when It Takes into an Aquarium

If you take the angelfishes into an aquarium or a new place, they will need the longer time to adapt. That is because they are too sensitive to the change. Thus, you need to try some ways to make them well adapted into the new place. 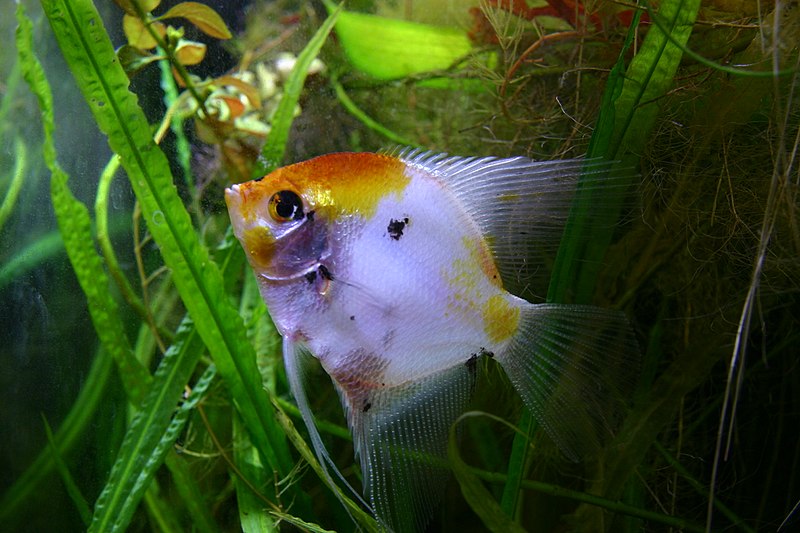 Fact 5: in Captivity, Angelfish is Able to Survive up to 15 Years

Commonly, the angelfish in captivity reaches the maximum average length of about 6” if they are well taken care. However, if they are placed in the large size aquarium or place, they will grow more. it can be up to 10” long. Fact 7: The Female and Male Angelfishes Have Similar Appearance

Fact 8: Freshwater and Marine Angelfishes have Lots of Varieties

There are two general types of angelfishes. They are freshwater and marine ones. The freshwater ones are commonly in silvery blue tones with the longitudinal stripes in dark tone. Some of the varieties are gold, veil, zebra, marble, and so on. The marine angelfish is commonly in green, blue, yellow and red tone which is with band and marking in other bright tones. They are also in the wide ranges of varieties. Fact 9: Angelfish can be too aggressive and can put other Fishes in Danger

This is really true. Angelfish can turn to be really aggressive especially in their young age. They can also put other kinds of fishes in danger by attacking or preying them. That is why you have to house them properly and separately.

Fact 10: Need the Space/House with the Same Type

This is much better if angelfish is placed in an aquarium with their type only. That is because they can be really aggressive especially the young one. Thus, it is better to house them with the same type of the fish. A Group of Angelfish

Here is the collection of Iguana facts. Iguana can be a cute animal for some people. Kids love to

Look at the animal testing facts below if you are a pet lover.  Animal is always the main subject